Friends who are always concerned about industrial production information know that a new type of robot has recently appeared-automatic spraying robot. 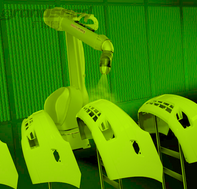 1. The mechanical structure of the spraying robot can be modularized and reconfigurable. For example, the servo motor, reducer, and detection system in the joint module are integrated; the joint module and the connecting rod module are used to construct the whole robot by reorganization.

2. The role of sensors in spray robots will become increasingly important. In addition to traditional position, speed, acceleration and other sensors, assembly and welding robots also use vision and force sensors, while remote control robots use vision, sound, and force. Multi-sensor fusion technologies such as sensory and tactile sensations are used for environmental modeling and decision-making control; multi-sensor fusion configuration technology has mature applications in productized systems.